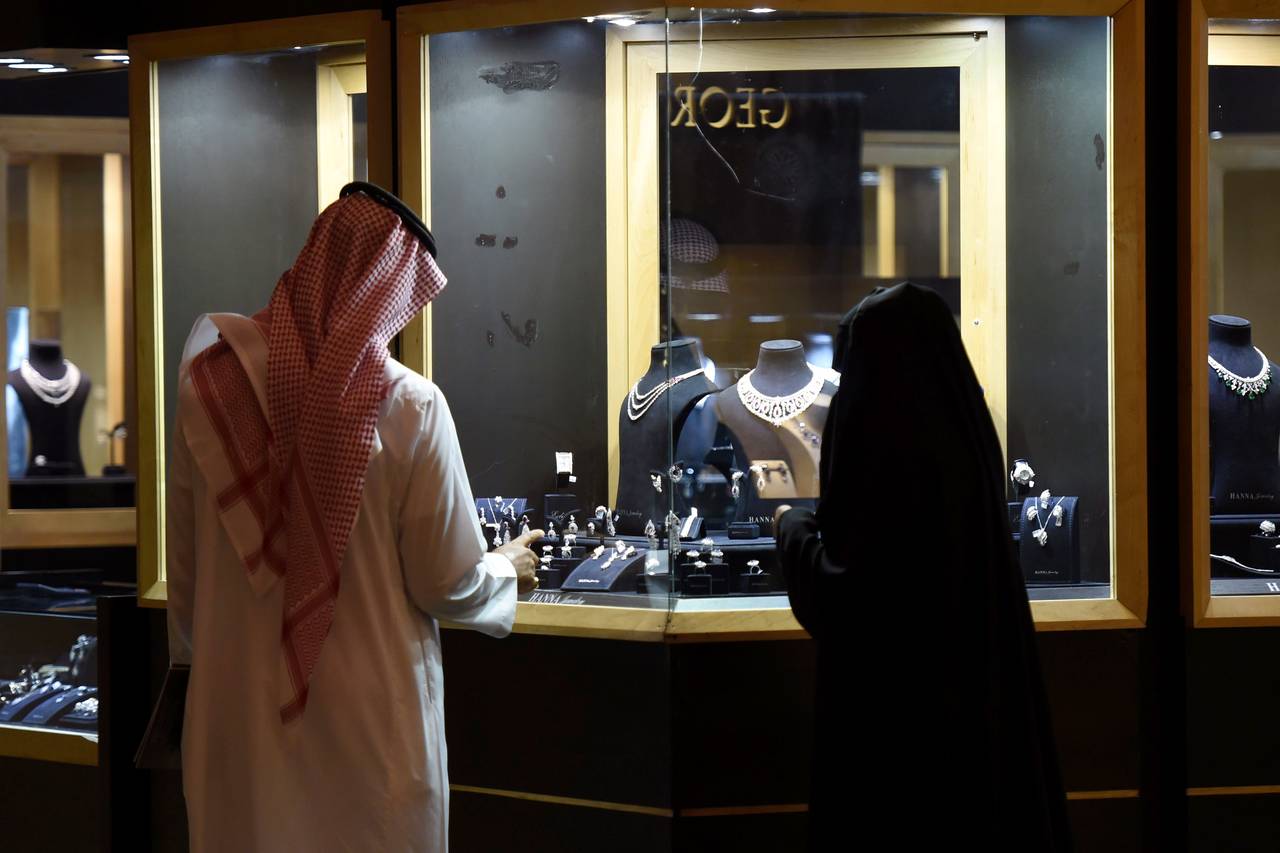 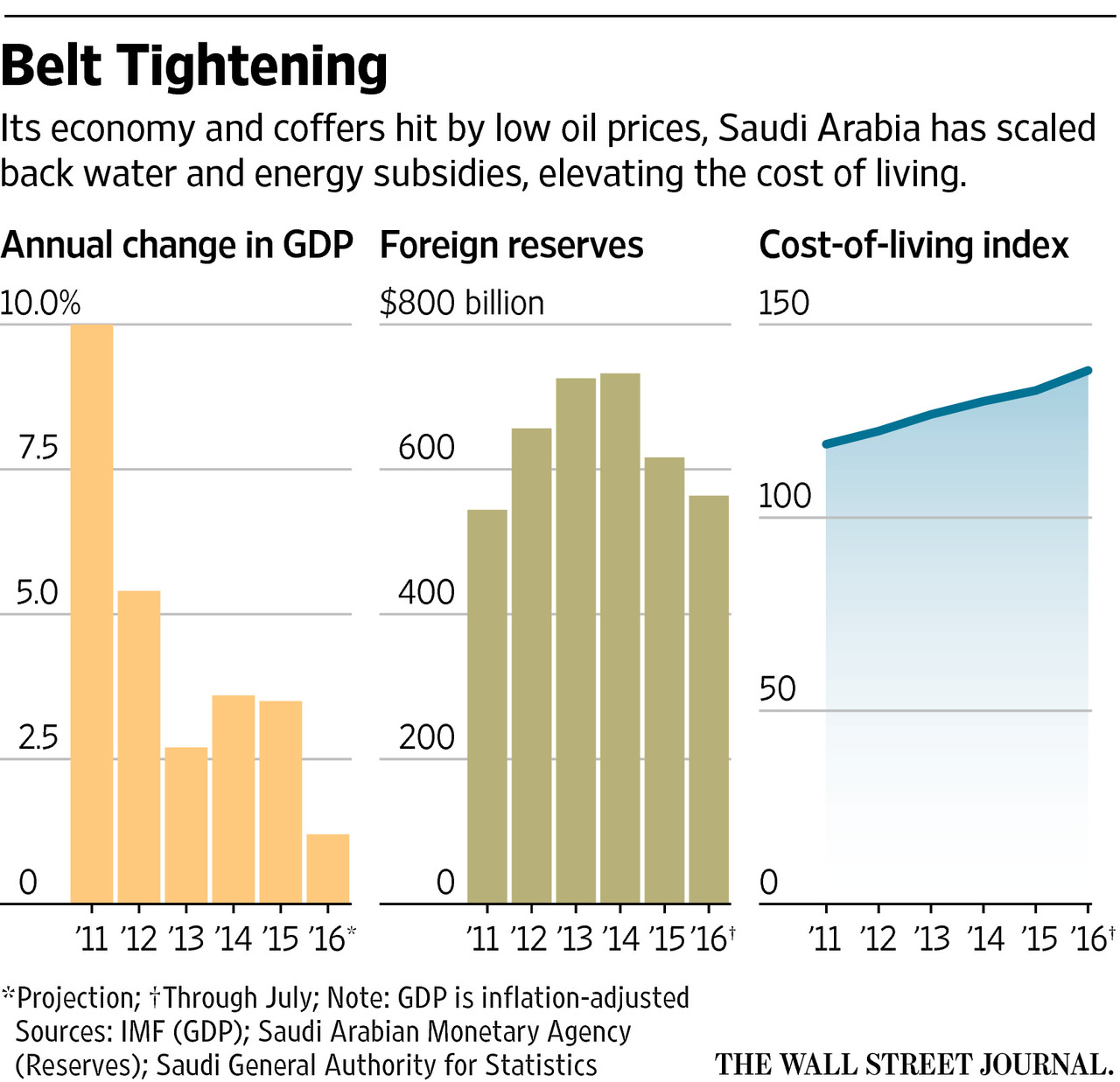 Mohammed Idrees used to travel to London once or twice a year, but these days the Saudi civil servant is asking his wife and children to cut back on using the family car to save fuel and has installed a solar panel for the kitchen to reduce electricity costs.

For decades, Saudi nationals such as Mr. Idrees enjoyed a cozy lifestyle in the desert kingdom as its rulers spent hundreds of billions of dollars of its oil revenue to subsidize essentials such as fuel, water and electricity.

But a sharp drop in the price of oil, Saudi Arabia’s main revenue source, has forced the government to withdraw some benefits this year—raising the cost of living in the kingdom and hurting its middle class, a part of society long insulated from such problems.
Saudi Arabia heads into next week’s meeting of major oil producers in a tight spot. With a slowing economy and shrinking foreign reserves, the kingdom is coming under pressure to take steps that support the price of oil, as it did this month with an accord it struck with Russia.

One option to lift prices that could work, some analysts say, is to freeze output at a certain level and exempt Iran from such a deal, given that its push to increase production to pre-sanction levels appears to have stalled in recent months. Saudi Arabia has previously refused to sign any deal that exempts arch-rival Iran.

As its people start feeling the pain, that could change.

The kingdom is grappling with major job losses among its construction workers—many from poorer countries—as some previously state-backed construction companies suffer from drying up government funding.

Those spending cuts are now hitting the Saudi working middle class.
Saudi consumers in major cities, the majority of them employed by the government, have become more conscious about their spending in recent months, said Areej al-Aqel from Sown Advisory, which provides financial-planning services for middle-class individuals and families. That means cutting back on a popular activity for most middle-class Saudis: dining out.

“Most people are ordering less food or they change their orders to more affordable options,” she said.
To boost state finances, Saudi Arabia cut fuel, electricity and water subsidies in December, after posting a record budget deficit last year. It also plans to cut the amount of money it spends on public wages and raise more non-oil revenue by introducing taxes.

But in response to these moves, inflation more than doubled from last year to about 4% now, crimping consumers even more.

The government doesn’t have much choice. Saudi Arabia’s real growth in gross domestic product slowed to 1.5% in the first quarter from the year-earlier period, according to its statistics office, and Capital Economics says data suggest it may have contracted by more than 2% in the second quarter. Much of that slowdown is related to consumer-facing sectors, which have struggled since the start of 2016 as rising inflation has eroded household incomes.

The political stakes for managing this slowdown are high. Saudi Arabia survived the Arab Spring unrest that toppled several autocratic leaders across the region and forced some others to change, largely by offering cash handouts and more government jobs to placate its people. About two thirds of Saudi workers are employed by government related entities.

Besides cushy jobs, such middle-class Saudis also received substantial overtime payments and regular bonuses. At the time of his ascension to the throne early last year, King Salman ordered a hefty bonus payment to government employees.

Such largess is looking like a thing of the past.

Besides cutting state handouts such as subsidized electricity and water, the government also plans to reduce money it spends on public wages to 40% of the budget by 2020 from 45% as part of its ambitious plan to transform the oil-dependent economy. It aims to cut one-fifth of its civil service as well.

Saudis are beginning to speak out about a sense of anxiety about the economy. “I think we are going through a difficult period,” said Emad al-Majed, a Riyadh-based pharmacy technician. “There will be suffering.”

Mr. Majed, who has two children, took a bank loan to purchase an apartment last year, a decision he said made him reconsider his spending habits.

“If you are used to a certain level of spending, how can you be told to limit your expenses and cancel some stuff?” he asked. “It is a good idea, but in practice it will be difficult for so many people.”

Saudi nationals are reluctant to gripe about rising costs, but there is clear discontent, some analysts say. In a region engulfed in political and sectarian strife, Saudi Arabia can ill-afford similar turmoil.

“Discontent so far has been mildly expressed,” said Robin Mills, chief executive at Qamar Energy, a Dubai-based consulting firm. “If the slowdown continues and starts affecting local jobs, that could change.”

For the kingdom’s fiscal position to improve significantly, analysts say oil prices would need to rise to $70 a barrel, up from about $46 now.

Saudi Arabia and the other large producers failed to reach a production-freeze deal in April, but its people are now increasingly jittery over their future. That has made people like Mr. Idrees, the civil servant, more cautious about spending because he sees people like him bearing the brunt of efforts to offset slipping oil revenue.

“I have become more diligent about spending because my view of the future is pessimistic,” he said. “There is a lot of talk about diversifying the economy, but the focus seems to be solely on increasing taxes.”

—Summer Said contributed to this article.